Ancient and modern: Gustav Metzger’s Liquid Crystal Environment. The 82-year-old artist has been hailed as the “godfather” of the altermodern by the inventor of the term, Nicolas Bourriaud

(The Tate Triennial)...an international show that attempts to define the new art of the post-economic apocalypse, christening it “altermodern”.

It is a new world of “wandering in time, space and mediums”. “Altermodernity,” Bourriaud continues, “arises out of negotiations between different agents from different cultures and geographical locations.”Artists, by this reckoning, have become nomads, a mobile community of outsiders within a vast globalised society, choosing their images, like words, from roughly the same visual language. It’s the next stage, Bourriaud claims, for civilisation after postmodernism, and artists who mocked its own claims to greatness (the people who canned their own poo, put donkeys in art galleries or exhibited their smoked cigarettes).

Eye of the Storm : An interdisciplinary conference on scientific controversy

The Arts Catalyst and Tate Britain announce an international call for artists, scientists, social scientists, theorists, policy-makers and other disciplines, to present in Eye of the Storm, a conference exploring scientific controversy from an interdisciplinary perspective.

Eye of the Storm aims to explore a range of controversies, from esoteric arguments between physicists over the structure of the universe, to disputes about the causes of species decline and climate change, and highly charged public controversies around the use of stem cells and the distribution of genetically modified organisms. When heated debates around the challenge of climate change have shown how abstruse uncertainties within a scientific community can be amplified and distorted to challenge the whole notion of human-caused greenhouse warming, Eye of the Storm sets out to examine the relationship between scientific uncertainty and public controversies around science.

We invite abstracts for papers and proposals for artists’ presentations and talks for Eye of the Storm that consider questions such as the following: When the whole culture and ethic of science is based on disagreement and alternative explanations, how does this essential scientific uncertainty work in the quest for knowledge? How do scientific disputes affect political decision-making and society’s relationship with science? As scientific and technological developments produce their own controversies, such as those around GM crops, what are the current critical controversies in and around science and technology? What alternative societal and cultural perspectives and contributions do artists and social scientists bring to this area? When the influential science sociologist Bruno Latour has worried that social science – in questioning the ‘reality’ that science examines – may have contributed to political abuses of science: what is the relationship between scholarship, science and politics?

Please send 200-word abstracts for papers and presentations (20 minutes maximum) to conference@artscatalyst.org. You may attach a short biog or cv. Artists may attach images (2MB maximum)

The design should be an open source mobile architecture/system/machine capable of functioning in extreme as well as temperate climates and containing mass/industrial and amateur production/ manufacturing potential. The unit is to serve as a model for mobile research within extreme cold environments, with the ability to incorporate high tech solutions while utilizing sustainable resources.

Jury decisions to be published by October 1, 2009.

Full information and rules and regulations are at: http:// www.arcticperspective.org

The first exhibition in Asia by one of my favorite Dutch artist Theo Jansen is held from January 17th (Sat) to April 12th (Sun). On display at the specially constructed venue are Jansen's "strandbeests" (beach creatures). These kinetic sculptures have "skeletons" made out of plastic tubes, and mechanisms that harness wind energy to walk and move.

I had shown his Ted Talk video in class and is very much loved by students. However it is very difficult to bring this mechanical(non-electronic) creature to walk on the sands in Hong Kong. The art climate here is just too strident for it.
發佈者： Popopope 於 3/21/2009 03:06:00 下午 1 則留言: 此文章的連結

The Simultan Festival is an annual festival for video, media art, experimental electronic music and a/v projects.
This year's edition runs under the theme Trans:position and will take place on 21-23 May, 2009, in Timisoara, Romania.
The festival wishes to sustain and to stimulate the creative ways of the most modern visions of perceiving and recording the cultural realities in contemporary art.
It presents the current processes and the way in which technology and society give rise to new forms of artistic expression by using the new media.
Based on a different theme every year, the festival presents video art projections, live performances, installations, lectures.

TERMS OF ENTRY
Simultan is open for submissions of innovative works, which use technology in a creative, ingenious way or are based on a peculiar, unusual story.
The applicants can send works which fall in one of the two categories below:
- experimental video
- generative visuals based on sound and image manipulations and motion graphics
Those interested may apply with a maximum number of 2 works; each of them
must not exceed 5 minutes in length.

DOCUMENTATION
After the event, a DVD/catalogue will be published and documentation will also be available on our website www.simultan.org.
Each of the admitted participants will receive a DVD/catalogue by the end of
2009.

Mechatronics, a portmanteau of 'Mechanics' and 'Electronics', is a platform investigates the possibilities of mechanical-based, tactile and space-related technologies on artistic and cultural practice. It includes robotics art and movable/ mobile sculpture, video/ sound sculpture, etc. Artists started to work with the chosen abstraction from 13th Century in western history and it was deployed in theater performance, sculpture & installation art since then. Leonardo De Vinci and Karel Čapek are two of the most well-known figures.

Annie On Ni Wan, currently a visiting research scholar at Academy of Visual Arts, Hong Kong Baptist University, will discuss theoretical background and development in mechatronic art and various art projects as a series of poetic systems, engage in lines of enquiry that result in shared sensations of monumental inter-connectivity.

Informal Meeting with CC Artists from the Philippines - Drip 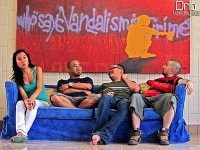 One of the presenter at the second Asia Pacific Creative Commons Conference, “The Commons Crossroads: Defining the Roadmap for Creative Commons in Asia and the Pacific”, Drip, will be performing in Hong Kong at the HK Live monthly event on Sat, 7 Mar 2009.

On the Sunday after the performance, the band would like to share how they made themselves famous and collaborated with other musicians worldwide through licensing their works under Creative Commons and distributing them using different online tools such as ccMixter.