Write in air with iphone 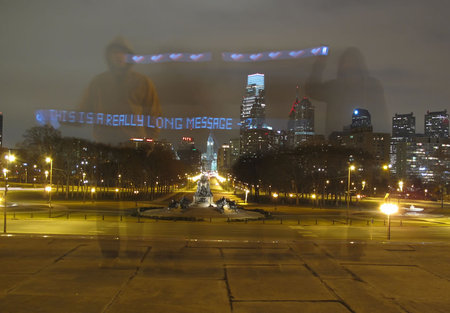 LED vision peripherals have been in the market since quite some time. 'Light Writer - POV Effect' from Laan labs allows you do the same, i.e. write on thin air using the iPhone. You just type in your message or select a piece of clipart, wave your arm in the air (night works best). Available for $1 at the app store it is completely worth it.

P2PU is an online community of open study groups for short university-level courses. The pilot "semester" has registration through August 26 and the courses will start on September 9. The semester is 6 weeks.
The courses being offered are:
Introduction to Concepts in Behavioral Economics and Decision Making-
-Copyright for Educators-
-Introduction to Cyberpunk Literature-
-Land Restoration and Afforestation-
-Open Creative Nonfiction - Take Away Narratives-
-Poker and strategic thinking

Beside Bill Viola, I think Rist is probably one of the most active video artists in the world.

Barcelona, Spain - The Fundació Joan Miró will be presenting an exhibition by the Swiss videoartist Pipilotti Rist, winner of the 2009 Joan Miró Prize. Pipilotti Rist is currently preparing, for summer 2010, an exhibition at the Fundació Joan Miró in Barcelona and another at the Centre Cultural Caixa Girona–Fontana d’Or in Girona. Both exhibitions are sponsored by the Fundació Caixa Girona. The artist has shown her work in galleries and museums around the world, including the Centre Georges Pompidou in Paris and MoMA in New York. She has recently completed her first full-length feature film, Pepperminta, which will be premiered in Switzerland in September this year, and is at present showing “Elixir”, an exhibition at the Kiasma Museum in Helsinki that had previously been at the Museum Boijmans van Beuningen in Rotterdam.