Frustrated that an army of politicians, bureaucrats, auditors, managers and administrators has failed to offer an innovative vision for higher education, Andrew Polaine (founder of the esteemed new media agency AntiRom, and a professor at Lucerne University of Applied Sciences and Arts) has decided to take the initiative. He's launched a project called "Creative Waves COTEN -Service Designing Education" to explore two questions: How might we we re-imagine the structure and experience of higher education using service design techniques? and, can service design be used in a purely online, collaborative environment? Andrew is convinced that service design can make a difference due to its focus on the entire ecology of a service. Andrew invites you to apply your most innovative thinking to the problem.

U-ordinator in conversation with Dortmund magazine (translated from Google)

Broeckmann: "The founding director have I wished for"
Dortmund, March 2010. Founding director, director, artistic director: Who durchsurft the web for information about Dr. Andreas Broeckmann find all sorts of terms for the function that the 45-year-old art historian since mid-2009 in the Dortmund U holds. Seemingly antiquated names for one who comes from the media scene and sets off to bring seemingly opposite directions as the classical art and digital in the former brewery building to another in exchange. For in the "U", where once the beer fermented in open tanks, resulting today after extensive restoration areas to a total of 15 000 square meters, in which the future of art and creativity, art and education for the design, art and cultural education for the digital age will take.

The Dortmund-editors spoke with Broeckmann about his role in the "U" and the need for cultural education in the digital age.

Broeckmann: The "U"-tower is transformed into the center for art and creativity. A number of institutions will move there and continue their program, other tasks are added.For example, the East Wall Museum, the Art Association Hartware media and research institutions such as the Technical University of Dortmund and the University. While these organizations continue their respective individual research or cultural activities, we hope that will be created under the umbrella of the "U" new partnerships and synergies. So shall the "U" a cultural create completely new type of play in the teaching of art and culture, and research has a central role.

Dortmund-Editor: What is your job and how you describe your own role?

Broeckmann: The task is the artistic and scientific management of the new "U - Center for Art and Creativity". This means that I "U" represents the outside to the inside and coordinate the cooperation between the different partners. I'm even there not a program but make sure that the planned projects of each institution are well-integrated content and deadlines.

The name of my job is currently founding director. That's what I liked, because I am assuming that this start-up phase of the "U", in which sniff all a little in the house and set up, and is not one will take up a half years. While we are in this construction phase, I can better be described as the founding director, because this designation is to dampen a bit of impatience.

Dortmund-editing: A key task in the "U" will be the cultural education. Why the teaching of cultural values in your eyes is important?

Broeckmann: The challenge for a contemporary art center is above all, that which is caused to cultural heritage and what takes place in contemporary artistic practice to bring in a reasonable way to broad sections of society. There have been after the Second World War a consensus on what the bourgeois cultural canon.
This has been promoted abundant in communities and countries. Since the fifties and sixties, especially in West Germany but also in the former East Germany, created a very rich cultural landscape - here in the Ruhr area - unparalleled in the world. But it was so extensive that it now extremely under pressure.

The ease with which still is above 20 or 30 years, each city a theater, an opera, a museum has kept away. On the one hand because the money is scarce, but also because the population structure has changed: a large number of people living in cities, sees what exists in cultural institutions, not of course as their own culture. It is a speculation of mine: As grows a new generation of children, adolescents and young adults who have quite a distinctive cultural life.
Zitat "Anyone who comes into the house in May, which experienced what we call in our terminology, the "prologue"."

They have always financed but it was never publicly funded. These are computer games, various types of street culture that is pop music, that's what they do on the Internet, etc. That is, there is a generation here, which of course for what she sees as their culture, have always paid for itself. Now you have to imagine that this generation shall appoint ten, twenty years later than their representatives in the municipal parliaments. Then is the question: "Do we want this opera house or theater really afford? Who's going go there anyway? I've never been to the theater, I was also interested than ever before. For my cultural life, I have always paid themselves. Why should we subsidize every chair in this theater every night with fifty or a hundred euros? "

We need to think about what makes our cultural heritage for the younger generation important and how to transport it. What gives you the cultural heritage in a way that people really come from the different population groups and say "Yes, that's my culture." This mediation work, we want to strengthen and to see this as a kind of research and experimental task. Here it is interesting that with the University and the Technical University of Dortmund are important research partners that can accompany such offers scientifically. I am convinced that this question of cultural education and communication is the key to the success of the U is present.

Dortmund-Editorial: What will await visitors in May in the "U"?

Broeckmann: Anyone who comes into the house in May, which experienced what we call in our terminology, the "Prologue". The actual opening will take place in October. As part of the prologue we are testing the house, appropriated to make us and show them some times in the first three floors.
On the first floor show colleges their first two exhibition units. One of the college, who works with photography. The Technical University of Dortmund presented in the exhibition "TU culture" a wide range of cultural issues.

The second floor displays the Hardware Media Art Association "Building Memories". This is an exhibition of major new media art installations by internationally renowned artists. It has been developed in cooperation with the Goethe Institute in Warsaw. Artists reflect on how bedeutungsmächtig architecture, both in a positive constructive sense and in a critical sense and broken. This is a show that deals with memory issues and the "U" a very interesting refraction thereby learns that an old building is supplied with its own great history, a new use.

"We do not want the "U" becomes a temple of art, but that place where social discourse."

On the fourth floor there is also the HMKV, as part of the scene-Hungary-festival, the exhibition "agents provocateurs et. In our context, this exhibition is opening an interesting approach, because they are busy trying to interfere as artists in society, in urban, in the political process. We naturally want the "U". We do not want the "U" is a temple of art, but that place where social discourse. The house is to function as a catalyst for what motivates us today in the society.

Dortmund Editorial: Today already many are eagerly awaiting the installation of the filmmaker Professor Winkelmann. What makes them so special?

Broeckmann: The installations consist of three parts. The first in the foyer is a large panorama of 13 in an Oval hung with scenes projected on the Ruhr. They give very typical and sometimes surprising insights into the Ruhr region as a cultural space. Professor Winkelmann for his team in the last two years has made really great shots.


The second installation will be on display in the so-called verticals - that the new staircase -. There are nine projections on a large wall. They are funny little scenes - with lots of humor and profundity shot - make that a little look into the soul of the Ruhrgebietler. The third installation is the crowning element: LED screen above surfaces mounted on the roof crown. There, run videos that have more metaphorical character is, it is an art installation with really huge proportions, which is much to see over the city. This makes the "U" again a special lighthouse. But there will be no advertising, but artistic moments that will draw additional attention to the "U" - and to remind the people because they come at least once a week should pass to the latest things considered.

Dortmund-editors: If you have a favorite place in the "U"?

Broeckmann: I think it depends on the time of the day: You have the morning on the outdoor terrace of the seventh floor of a fantastic view over the city, where it can enjoy the sunrise.
發佈者： Popopope 於 4/04/2010 02:24:00 下午 沒有留言: 此文章的連結

Looking Through Film: Traces of Cinema and Self- Constructs in Contemporary Art 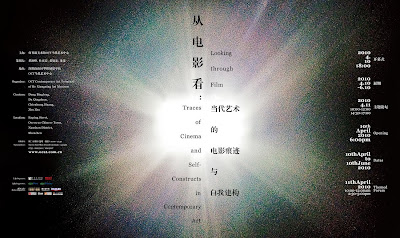 从电影看：当代艺术的电影痕迹与自我建构
Looking Through Film: Traces of Cinema and Self- Constructs in Contemporary Art